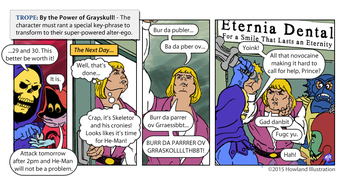 Dental Care: Why you should probably just keep putting it off.
Advertisement:

Twisted Tropes is a webcomic created by Mike Howland of Howland Illustration for YOU! And anyone else who enjoys a good trope. Every week (well, almost...) a new strip is popped out hot and fresh from the dutch oven of Mike's mind. A description of the trope in question is included in the top left of every comic to help set the stage, and from there the twisting commences. Characters from any medium you might find a trope in are included, and typically change every week.

The comics are collected on Mike's DeviantArt

page or in an album on Howland Illustration's Facebook page.

Twisted Tropes is drawn by hand, then color, speech-bubbles and text are added in Adobe Photoshop. The strip started on April 1st, 2015.

A list of tropes covered by this webcomic can be found on the Trivia page.