You Just Ruined the Shot 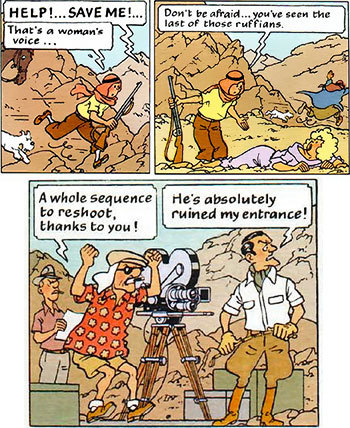 Frank Drebin: When I see five weirdos dressed in togas stabbing a guy in the middle of the park in plain view of a hundred people, I shoot the bastards! That's my policy.
Mayor Barkley: That was a Shakespeare in the Park production of Julius Caesar, you moron! You killed five actors! Good ones!
— The Naked Gun
Advertisement:

The Hero (often a Lord Error-Prone or Comedic Hero) hears a cry for help or sees a crime taking place. Rushing in to save the Damsel in Distress, he knocks the villain to the ground and — a cameraman appears from hiding and upbraids him for ruining the shot. The damsel may start flicking through the script, or the crook complains that the director is taking Enforced Method Acting too far. Either way, the hero is left to slink away apologetically, feeling like The Ditz he is.

Equally, a character may overhear actors practicing a script or a TV show being played too loud, think he's stumbled on a conspiracy, and try to save the day. Either way, he's going to end up looking foolish and annoying a hell of a lot of people along the way.

In a more optimistic outcome, the director or producer applauds the intervener for their bravery and expressiveness and offers to hire them, or at least throw their unexpected appearance in the final cut of the film.

Sometimes they're a Fish out of Water who doesn't understand the medium at hand and tries to raid a theatre stage.

In a variant, the hero could be charging in to stop a crime, only to be supremely embarrassed when they learn the hard way it was actually a police sting and they just fouled it up.

The key here is that it's a Show Within a Show; the titular "shot" and its disruption happened within the story's continuity. If the characters ruin the shot of the show you are watching, that means there is No Fourth Wall.