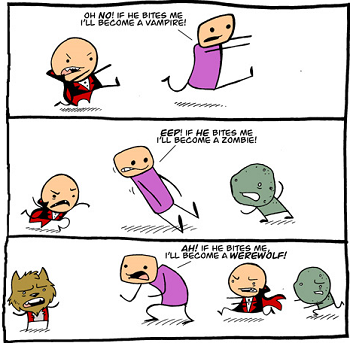 Well, that bites and sucks.
"Jesse is dead! You have to remember that when you see him, you're not looking at your friend. You're looking at the thing that killed him."
— Giles, Buffy the Vampire Slayer
Advertisement:

The Virus turns people into itself or into entities subservient to itself. The transformation is both mental and physical. The converted will have unflagging loyalty and be instantly ready to commence villainous actions. Expect it trying to cause The Plague.

If the converted still remember their previous selves, they will use their personal knowledge to prevent their former loved ones from doing them harm, or from trying to get them back. Despite the body snatching, if The Virus is only able to crudely mimic human behavior it may lead to a Glamour Failure that's especially noticeable. Some strains of The Virus are so powerful the infected can even mutate environments. This tends to lead to the Womb Level and Organic Technology.

How much of the former person is left after infection depends on the series, as does whether or not the process is reversible. It also depends on whether it's a main character or not, they can sometimes use The Virus' powers against it with enough Heroic Willpower (a property more typical of The Corruption) and even play Sheep in Wolf's Clothing for a while. If it's one of the main villains using villainous willpower, then they tend to end up on the high end of the Elite Zombie chain. Though it's equally likely for the villain to overestimate their ability to do this and self infect, only to discover their Transhuman Treachery ran smack dab into Evil Is Not a Toy. If The Virus is sentient, then more often than not it is also a Hive Mind with a Hive Queen directing it.

Stories of yesteryear often tied this symbolically with the Red Scare; nowadays if it represents something, it's The Heartless. The lowest common denominator for man to sink to, susceptible when one lets their own Dark Side take over – and it takes people around them down too.

Often how humans become something much, much more horrible.

Sometimes overlaps with Body Horror in cases where the host enters a zombie-like state before being completely consumed. Compare Viral Transformation, where a similar change does not cause a Face–Heel Turn. See also Puppeteer Parasite, Clone by Conversion, Face Full of Alien Wing-Wong, Contagious A.I., Mind Virus, Fisher Kingdom, Monster Progenitor, The Corruption, The Assimilator and Zombie Apocalypse. Commonly represented with Tainted Veins or a Red Right Hand. When the virus itself is portrayed as a miniature monster, rather than turning its victims into monsters, it's Monstrous Germs.

Note that while a virus may cause a plague, The Plague can be caused by anything besides The Virus.

Papi Takes Over the World

As Grandfather and his evil spread across the world, kids everywhere are transformed into Senior Citizombies and treehouses become tapioca factories. Pretty soon, there's hardly anyone left that isn't in his power.

Papi Takes Over the World

As Grandfather and his evil spread across the world, kids everywhere are transformed into Senior Citizombies and treehouses become tapioca factories. Pretty soon, there's hardly anyone left that isn't in his power.