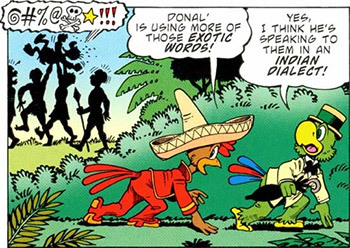 Over time, people have come up with various handy ways to insert swearing, or at least the recognition of swearing, without setting off the Censor Alarms. One of the oldest and easiest ways to do this — besides just slapping a black censor bar over the text and leaving the details to the reader's fertile imagination — is by inserting random %&$#?@! symbols. This method of censorship has been seen in newspaper comics from the beginning, making this trope Older Than Radio. Traditionally they include characters that don't exist on a keyboard — stars and other astronomical objects, clouds and lightning bolts, skulls and bombs are all classic parts of this symbology — but basic ASCII will do in a pinch. While a single bout of swearing may be represented by only one set of symbols, it's more common for a variety of different things to be mixed together in a single speech balloon.

Alternatively, thick scribbles may be used instead to suggest hastily and forcefully scrawled writing — and consequently angry, fast speech — without actually resembling any specific words.

The severity of a given bout of swearing may also be represented by the nature of the symbols. A few sequences of ASCII and simple shapes like stars or lightning bolts, perhaps interspersed with actual writing, may suggest language just beyond politeness. More inventive and mixed symbols hint at more vocal and profane yelling. If a speech bubble contains a vivid constellation of complex, large and detailed shapes, then it's assumed that a truly impressive bout of obscenities is being censored.

Fun fact: The technical terms for such a stream of symbols is "grawlix", a term coined by the cartoonist Mort Walker in ''The Lexicon of Comicana", or "profanitype". Walker also identifies a number of distinct types of this based on specific symbols, such as "jarns" (curved or angled spirals), "quimps" (astronomical objects like moons and planets), "nittles" (stars and asterisks) and true grawlixes (nonsense scribbles).

More common in recent times is the use of asterisks instead of random symbols, a case of T-Word Euphemism at work. See Sound-Effect Bleep for the audio version, Angrish for gibberish words used in place of swearing, and Narrative Profanity Filter for other ways of creatively conveying foul language.

Only the F-word is replaced with a bleep and symbols.

Only the F-word is replaced with a bleep and symbols.