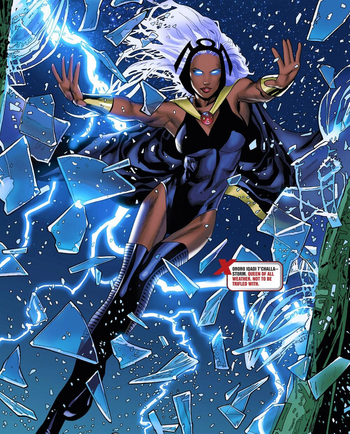 Just as Raven Hair, Ivory Skin makes for quite a striking visual design, so does the inverse: a character with white or silver-colored hair and skin that is dark enough to heavily contrast with it. All the more notable since, unlike the former, this combination of traits is very rare for young people to have in real life, though not impossible either. As a result, characters with these traits will stand out even more, while also having an appearance that is compatible with realistic settings and more naturalistic character designs. This visual contrast is especially common in Japanese media due to a lot of manga being drawn in black-and-white, and thus the contrast between dark skin and light hair on a character will stand out even stronger on the page.
Advertisement:

Many times the character's striking appearance is the result of unusual circumstances, be it the influence of the supernatural, being from an alien or magic-inclined race, causing their white hair to double as a case of Mystical White Hair. Other times it's the result of severe trauma or medical experimentation which may also grant them unusual abilities that an outsider might perceive as supernatural. In some cases, they don't have any unusual powers at all, and the character has the combination of traits for the simple purpose of making them visually stand out more for viewers' sake. At any rate, something about them is special, and the creators want viewers to take note.

It should be noted that it's not nearly as uncommon to see a combination of dark skin with blonde hair (that usually darkens in adulthood) in certain groups native to the Pacific Islands, such as Melanesia and the Aboriginal people of Australia, or among mixed families.

See also Significant Green-Eyed Redhead for another trope that uses a rare eye and hair color combination to draw attention to a character. Often connected to Ambiguously Brown for non-live action examples, particularly in cases where the character's dark skin is an aesthetic choice to contrast with their hair color rather than a deliberate indication of the character's ethnicity.