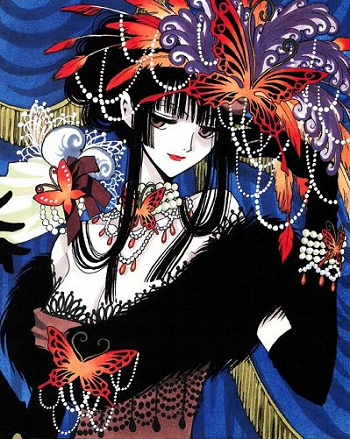 "Lips red as the rose. Hair black as ebony. Skin white as snow."
— The Magic Mirror, Snow White and the Seven Dwarfs
Advertisement:

Dark hair and pale skin as an indication that a character is beautiful. In western culture, this is a once-dead, now reviving trope, thanks to the Goth and Retro movements bringing an increased awareness of this and the 1950s pin-up style regaining popularity. In addition, the vampire fad and the rising fear of skin cancer have helped with the resurgence of this trope. It has started to fade away again with the tanned and bleached look making a comeback. This is also quite popular in Eastern media, being the traditional standard of Asian beauty, and the fact that most of the population has black or very dark brown hair helps. The high contrast also makes for a striking and visually appealing appearance. Accents of pink or red, usually on the cheeks and lips, can also (eerily) heighten the appeal.

There might be a crossover between this look and Eerie Pale-Skinned Brunette, in the form of attractive goths, beautiful vampires, and other characters who manage to be both creepy and beautiful. Sometimes this look can be seen as too eerie, and emphasized as But Not Too White. May overlap with Pretty Boy if male. Somewhat contrasts with Tall, Dark, and Handsome, which is traditionally understood as a handsome dark-haired man, but often connotes more of a "healthy" complexion showing the man to be more "active" or "outgoing" than pale skin would. May overlap with Aloof Dark-Haired Girl if female.

Please note that for a character to qualify for this trope, they need to fulfill two criteria: