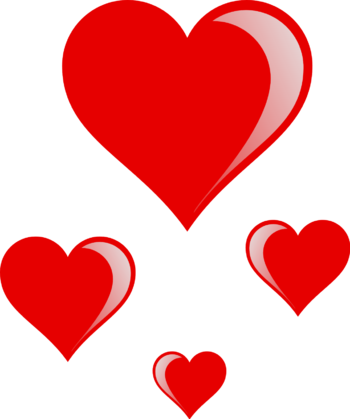 You are my sunshine, my only sunshine,
You make me happy when skies are gray,
You'll never know, dear, just how I love you,
Please don't take my sunshine away.
"Love is not love
Which alters when it alteration finds,
Or bends with the remover to remove:
O no! it is an ever-fixed mark
That looks on tempests and is never shaken"
— William Shakespeare, "Sonnet 116"
Advertisement:

Ah, love. One of the fundamental forces of drama, and a key component in Heartwarming Moments. Love comes in many forms, but this index lists virtually all Tropes concerning the most recognizable form, romantic love. For tropes about familial love and platonic love, see Family Tropes and Friendship Tropes, respectively. For the unconditional love felt for everyone, see All-Loving Hero.