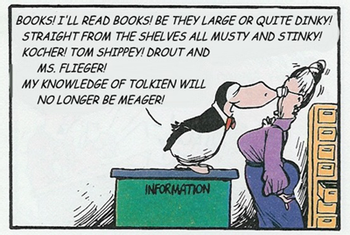 Opus reports.
“What we find in books is like the fire in our hearths. We fetch it from our neighbours, we kindle it at home, we communicate it to others, and it becomes the property of all.”
— Voltaire
Advertisement:

Many tropes originated in literary works. Literature being nearly as old as writing itself, most of The Oldest Ones in the Book date to the classics, most Public Domain Characters appeared in print well before the first TV broadcasts, and even today, with the supposedly dwindling popularity of books in favor of more modern media,note Books retain one critical advantage over almost all other types of media in that all they require is a light source, no playback device or power source is needed to enjoy one as long as you can read there are books with enough cultural impact to spawn TV Tropes.