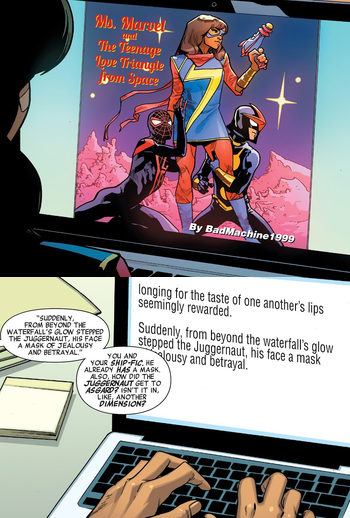 Fan fiction is what literature might look like if it were reinvented from scratch after a nuclear apocalypse by a band of brilliant pop-culture junkies trapped in a sealed bunker.
— A Time article discussing a certain phenomenon.
Advertisement:

If you want something done right, do it yourself.

Fan Fiction is a form of Alternate or Expanded Universe created by the fans of a work, rather than the work's original creator. Fan Fiction stories, or "Fanfics" as they are often called, are written for any number of reasons, such as:

Due to the inexperience of many fanfic writers, fan fiction has gained a reputation for being a source of horrible, horrible writing. However there are fanfics out there that are INCREDIBLY good — sometimes arguably being just as good as, if not better than, the original work.

Saying "It was like a fanfic episode," though, is not usually a compliment.

Fan fiction is often the place where Epileptic Trees are planted and cultivated. Expect many, many, many more fics to star the Ensemble Dark Horse than The Hero.

Although fanfic exploded along with The Internet, it existed well before the Net did. Such luminaries as John Stuart Mill contributed unauthorized, original stories set in a fictional universe. Before medieval French troubadours were shipping Lancelot and Guinevere, the ancient Greeks were writing plays about relationships between characters in The Iliad. In Plato's Symposium one character complains that a play by Aeschylus got the characterization of Achilles and Patroclus wrong. Namely, that it got the Lover and Beloved dynamic backwards.

Not all fanfic is written, though that's the most common form. It can be in any format that can tell a story. In Japan, manga doujinshi (amateur "comic books") are a common vehicle; and with the increasing ease of their production on personal computers, Fan Videos (ranging from anime series, to Star Wars) have also appeared.

The distinction between fanfic and original fiction, as we know it today, is largely created by modern copyright law; much of classical writing is actually "fan fiction" based on older sources. The major distinction between fanfic and a story inspired by another story is that the story a fanfic is based on has one or more "official" versions, usually owned by a company, a creator, or both. Thus, things like The Infancy Gospel of Thomas

, a piece of biblical apocrypha featuring Angry!Uber!Baby Jesus, or variations on Arthurian Legend where there is no Holy Grail and Lancelot's affair with Guinevere never happens, would not "count" by this definition.

No statement on the legality of fanfic, based on works still under copyright, has ever been given in American formal law or in its courts. The two most common arguments for fanfic being legal involve either implied consent — companies and authors have every right to enact a Fan-Work Ban as evidenced by FanFiction.Net's banlist but are mostly tolerant — or fair use — the non-profit, educational and transformative use of the work justifies its existence; see "Legal Fictions: Copyright, Fan Fiction, and a New Common Law"

. The first is something of a misunderstanding of how legality works; you would need active permission from the rights holder for fanfics to be legal and silence does not impart permission. The latter is the main argument that sparked the development of the Organization of Transformative Works, a fan labor advocacy site.

that fan fiction can be a good way to hone one's writing skills. Sir Terry Pratchett acknowledged it exists and was cool about it, pointing out that everything works so long as people are sensible about it. He added two caveats: anyone doing Discworld fanfics shouldn't even think of doing it for money, and authors should take care not to put it where he might see it — since he didn't want to risk being accused of plagiarising his plagiarists (so to speak) for his own future plots, however inadvertently. George R. R. Martin, author of the epic fantasy series A Song of Ice and Fire, expressed his disdain for the practice

, saying that "creating your own characters is a part of writing." He's even gone so far as to threaten legal action should he become aware of any fan fiction set in the Westeros universe. In contrast, writer/journalist James Bow makes a rather firm case

for supporting fanfics, pointing out that it forms a stepping stone towards creating your own characters and setting. As far as media businesses are concerned, reactions have ranged from Archie Comics demanding immediate removal to Paramount taking some of the better Star Trek fanfics and having them published in print books.

It should probably be noted that several big-name authors are themselves writers of fanfics. Both Stephen King and Neil Gaiman have written (for example) stories dealing with Cthulhu, Dracula, and Sherlock Holmes, and label these stories fanfics. Contributors to franchises such as Doctor Who such as Paul Cornell have often posted wholly unofficial stories to their blogs and websites, above and beyond their fully licensed scripts and novels.

Some franchises — such as Star Trek — have actually turned fan fiction into a profit source by creating Tie In Novels. These books are usually penned by young and upcoming authors, often former fanfic writers, and represent an intermediate state between fan fiction and completely original fiction.

In the end, more and more media outlets are recognizing that fan fiction and other fan works are a simple fact of life. And as art imitates life, it's now possible to find fake fan fiction created as part of a marketing campaign. For example, the 2010 season of Showtime's United States of Tara introduced a new character, an artist who had created and published a comic book character named "Princess Valhalla Hawkwind". As part of the promotional buildup for this, Showtime actually created a "fan site"

Some fan fiction becomes well-known enough to influence other fanfics, which themselves influence more fanfics, and so on in a domino effect. This can and does result in the creation and perpetuation of Fanon — when one author comes up with a "cool detail" and others blindly copy it without realizing it was a fellow fan's invention and didn't belong to the official source material. Furthermore, characters can become Flanderized by the feedback loops of fan fiction, sometimes changing dramatically from their original form.

Eventually, this accretion of fan-born details and mutations turns into things that "everybody knows" about the series. Those new to or unfamiliar with the original material are frequently confused into believing that it obviously must be canon if so many people mention it, even "facts" of the Epileptic Trees variety. This is especially the case with series that have long runs and which gloss over details which are unimportant to the plot but are of interest to the fans and the fan writers.

One example is the Harry Potter fanfic The Draco Trilogy, which was apparently so widely read that details such as Blaise Zabini being female and Ginny's name being Virginia were taken to be canon, although they were both refuted by later books.

Another example of this is the manga/anime Ranma ½, released well before the Internet became ubiquitous and when many fans had no easy access to the original source material. All manner of detailsnote  (including the explanation of Akane's mallet as either a ki attack or as residing in a hyperdimensional pocket, her Flanderization into a "psychobitch", her lethal cooking — rather than being just bad — and the names and fates of the many missing mothers) were never touched on in the actual show but became standardized in Ranma fan fiction over the course of approximately a decade. The process was accelerated and exacerbated by the appearance of fan fiction written by people who had never actually seen the show itself and whose only exposure to Ranma was other fan fiction.

It's not surprising that fans of some shows occasionally pen FAQs solely to reduce the accumulation of fanon in this way.

Another problem with fan fiction is sometimes writers don't do their research even when it is very simple. A common occurrence is when an author from a country other than the original work's country of origin writes characters as if they are from their own country. An example is Harry Potter where non-British writers (particularly American) make characters act and think like an American would; this also happens vice versa as seen in Fifty Shades of Grey.

Currently, the largest source of fan fiction on the Net (and probably anywhere else) is the aptly named FanFiction.Net, which as of 2022 offered approximately 14 million stories across all but a select few canons (which were banned due to creator request) and an automated system for posting. A newer site called Archive of Our Own is starting to nip at FanFiction.Net's heels, though, with over 10 million stories and less restrictions on what can and cannot be posted. In mid-2013, Amazon.com joined in the act with its Kindle Worlds program, which allows for the publication and sale (!) of fan fiction from specific 'verses, which was shut down in 2018.

Of course, the hive mind has a few favorites. There are also a few favorite unfavorites, if that doesn't confuse you too much. Some here have even written a few.

Note that since this is intended to be an index of fics with pages, a Red Link will be frowned on and given a very brief (week or two) grace period before being removed by your fellow tropers. Start the page for the fic if you think it should be in this index.

This page is for the sub-medium of literature. Other types of fan work belong on the subpages of Fan Works (Fan Film, Fan Vid, Fan Music, Filk Song, and so on). We're working on moving the misplaced works — help Fan Films, Fan Vids, and others get to their correct index!

Special note for authors of fanfics: The fact that you wrote the fic gives you no say in whether or not we have a write up on it, unless you create the page for it yourself. Furthermore, you do not have more say on the contents of the page than any other author. You quite expressly do not have the right to have our page taken down because you wish to disown your work or because you don't like the tropes we have found in it. The page here is ours. The fic is yours. Those are different things.

open/close all folders
Categories of Fan Fiction
By format:
By genre:
By relationship with canon:
Related Topics
Fanfics by Medium of Source Material
Statler: These stories did do something right.
Waldorf: What do you mean?
Statler: They make the source material look amazing in comparison!
Both: Ohohohohohohohohohohohoho!