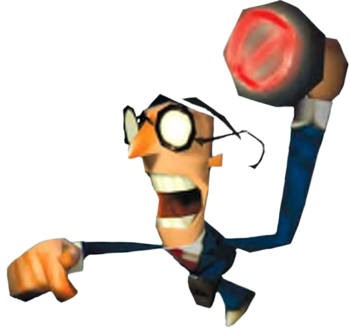 "NO!"
"WARNING: The following program is a realish documentary, and may contain language which is vulgar, offensive, or grammatically awkward. Such language has been censored whenever possible, but for the sake of higher ratings, we may have let a few gratuitous and especially titillating instances slide."
— Duckman, "American Dicks" opening
Advertisement:

Interesting tropes about blanking out things not meant for corrupting sensitive eyes or ears. This index is not about The Content Policy of TV Tropes itself, and not to be confused with Censor.

Compare These Tropes Should Watch Their Language. See also Help! Help! This Index Is Being Repressed!.

Tropes too adult for kids and banned in several countries:

In-universe, often "conveniently in the way"

Other tropes that can involve censorship: