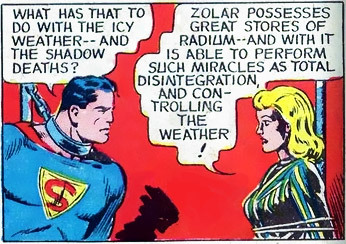 Why, this explains everything!
"Any sufficiently advanced technology is indistinguishable from a completely ad-hoc plot device."
— David Langford, "A Gadget Too Far,"

as a corollary to Arthur C. Clarke's Third Law
Advertisement:

Phlebotinumnote or "phlebotinium" in the Commonwealth countries is the versatile substance that may be rubbed on anything to cause an effect needed by a plot. Examples include but are not limited to: nanotechnology, magic crystal emanations, pixie dust, and Green Rocks.

In essence, it is plot fuel. Without it, the story would grind to an abrupt halt. It's the science that powers the FTL drive on the starship so the characters can get somewhere, it's the magic that hatches the Egg MacGuffin so the protagonist can save an endangered species, it's the strange things unknown to science or magic that do basically anything except those limits and dangers required by the plot. The reader does not know how Phlebotinum would work and the creators hope nobody cares. In essence, it's a plot device that abstracts away the problem of hard science.

According to Joss Whedon, during the DVD commentary for the pilot episode of Buffy the Vampire Slayer, the term "phlebotinum" originates from Buffy writer (and Angel co-creator) David Greenwalt's sudden outburst: "Don't touch the phlebotinum!" apropos of nothing.Fun Fact Whether or not he had the etymological connection in mind, "phlebotomy" is the drawing of blood, coincidentally appropriate in context.

If the phlebotinum in question is simply a physical substance with unusual/extreme properties you are almost certainly dealing with the element Unobtainium.

A.K.A. Handwavium or Contrivium. Compare Author Powers, Hand Wave, Theory of Narrative Causality, MacGuffin, Deus ex Machina, and A Wizard Did It. Contrast Misapplied Phlebotinum, and Minovsky Physics for when it's actually examined in scientific detail with clearly defined limits and uses. Not to be confused with Phlebotomy.

Applied Phlebotinum is among the Tropes of Legend.