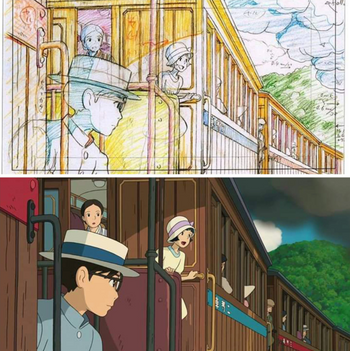 "I don't consider them pictures... In reality I'm not drawing. I'm writing a story with a unique type of symbol."
— Osamu Tezuka, a.k.a. The Godfather of Manga
Advertisement:

Animation, Japanese-style. Best known for its distinctive early "big eyes, small mouth" style of character design and the wide range of subjects and genres it covers. Animation is considered just another medium in Japan, lending itself to any story for any age level. Anime, encompassing work with adult themes such as Psychological Horror and erotica, is the primary reason for the complete destruction of the Animation Age Ghetto. It is also very useful in certain genres like Sci-Fi which would otherwise be very expensive to produce.

As a result, a large number of Japanese television shows and movies are animated; there is also a very large market for direct-to-video animation (known as OVAs). Most of these productions are not restricted to topics suitable for the under-12 set.

It is a commonly held misconception that the term anime is derived from French. It's actually a loanword of the short form (アニメ) for the Japanese word animeshon (アニメーション), itself a loanword from English. note The Japanese use the term to refer to any and all forms of animation, so don't be fooled by some fans saying that anime are not cartoons; they are, just done in a very specific style. Older sources will often refer to anime by the more descriptive term "Japanimation", an obvious portmanteau of Japan and animation. This terminology fell out of style in the West in The '90s with the rise of the first generation of Occidental Otaku. Anime's trademark visual style is shared with Manga (Japanese comic books and graphic novels); in both cases, it is inherited from the work of earlier authors/artists such as Osamu Tezuka, who is the father of modern Japanese manga and anime, and Junichi Nakahara

, a godfather of manga art.

A debate surrounds the origins of the "large eyes" popularly used in anime. Some sources say it originated from Osamu Tezuka, who was heavily influenced by American animators such as Walt Disney's work or Betty Boop (one of Tezuka's favorite characters). On the other hand, one of the earliest artists to use the "large eyes" look was the above mentioned manga artist Junichi Nakahara

, who was drawing illustrations for popular female Shoujo magazines that look very similar to modern manga/anime art, including the "large eyes". A similar style also appeared in popular Kamishibai

(paper theater) shows by the early 1930's, with popular characters such as Jungle Boy

. The distinctive art style which began in 1920's Shoujo magazines evolved over the decades into the familiar art style that has characterized manga and anime for many decades. Expressionist culture of Japan, where the eyes are the main focus on reading peoples' thoughts, also probably had a large effect on the large eyes style.

In response to contemporary criticism of the typical anime/manga art style, the artist/author Shirow Masamune has said: "I've heard that some people complain about the large eyes and small noses and mouths in Japanese manga. But I don't see a whole lot of difference when I look at Disney characters."

Osamu Tezuka's work was essential in laying the foundations for modern manga and anime as they are known today. His seminal creation — and the one most Americans are likely to be familiar with — was Tetsuwan Atom (Mighty Atom). It is perhaps better known in the English-speaking world as Astro Boy.